A short introduction to golf croquet

Both offensive and defensive moves can be executed. Croquet is a stand-alone, exceptionally interesting and challenging sport that could easily be categorized as a mix of snooker, chess and golf. The two main varieties of Croquet are the “Association Croquet” and the “Golf Croquet”.

Tactics are not unimportant, but in the foreground is a good stroke technique and precise positioning of the balls. The rules of the golf croquet are easy to learn, but the practice of accurate and sometimes spectacular strokes requires practice and experience. Gender and physical constitution are not important as it is a non-athletic sport – however mental endurance is of high importance.

Golf croquet is played with four balls: black and blue against red and yellow. On the 25,8 x 32 m large, absolutely level playing field there are six hoops to play through and a wooden pole in the middle of the lawn. A distinction is made – similar to tennis – between single and double games, with a double each player a ball colour is assigned.

After the beginning player has been determined by coin toss, he receives the blue and the black ball. Starting with the blue ball is now played in the order of blue, red, black, yellow. A turn consists of a single stroke.

The six-hoop course is to be played once clockwise and once counter clockwise. At each hoop, only one point can be “earned”. When a hoop has been scored, both players use their balls to play the next hoop. The player who scored 7 points first wins the game.

Sounds easy? But it is not, because every hoop is fought for. The balls of the opponent may be shot away, the way to the hoop of the opposing balls can be blocked with own balls. The other player tries to jump over the opponents ball through the hoop (jump-shot). A ball already halfway through a hoop can be shot backwards away from the hoop. The resulting possibilities are amazingly varied and make the game interesting. Often it comes to a veritable war of nerves for individual goals.

So that even beginners and strong players can play against each other, there is a handicap system, which gives the weaker player extra shots. 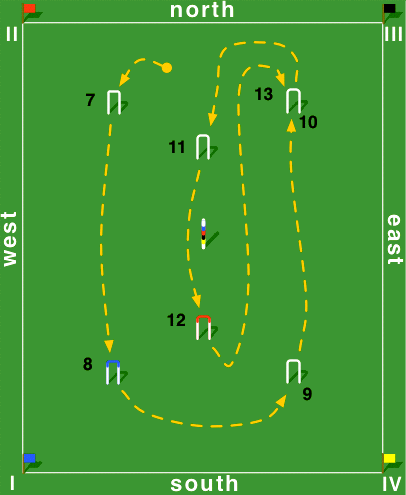